Clothing and toys are manufactured overseas. So why not make software there too, where labor is cheaper?

The enthusiasm for overseas outsourcing and offshoring, mirrors the enthusiasm for Internet companies in the Nineties. In a recent article, Ravi Chiruvolu, a partner at Charter Venture Capital wrote that “Venture Capitalists decided that because of cheap engineering talent in countries like India it would be more cost effective to outsource software development. If Nike could outsource sneaker manufacturing, we could do the same with code.” Following similar logic, Oracle has announced it will more than double the number of software engineers it employs in India to 6,000.

Although the offshoring trend has resulted in a net transfer of jobs outside of the US, this article isn’t about job losses in the United States. We live in a global economy and people in India deserve jobs as much as people in the United States or anywhere else. It’s worrisome when companies are criticized solely because they have hired people overseas.

Outsourcing programmers works when the software developed isn’t a key part of the pipeline of innovation for products a company actually sells. For example, when website design or back-office software such as payroll or inventory control is outsourced, that can be good because it improves operational effectiveness.

But writing innovative software cannot be done on an assembly line. It requires hard-to-find development and design skills. Farming out development to legions of programmers overseas will not create a differentiation advantage. When a technology company outsources software development, that company loses its capacity to innovate and its competitive advantage.

Why Some Software Companies are Confusing the Box for the Chocolates

Recently, I bought some chocolates as a gift for some friends from a specialty shop. These chocolates are remarkable. Owner Jean-Marc Gorce makes them by-hand and his small shop has been rated as one of the top ten in the United States. In addition to being a chef, Jean-Marc is also an entrepreneur and an innovator.

Jean-Marc recently started selling his chocolates in gold and blue boxes. I told him I liked the new boxes. He explained that his wife designed the boxes and he found a company in the Philippines that could produce the boxes in the small volume they needed for a good price. 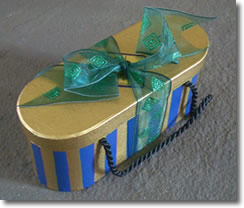 Jean-Marc’s gold and blue boxes are an example of successful outsourcing. Jean-Marc sells chocolates, not boxes. The design and production of chocolates is his core competency. Jean-Marc can outsource box production to improve his operational efficiency without sacrificing his reputation as a maker of superlative chocolates.

While outsourcing boxes improves chocolatier Jean-Marc’s operational effectiveness, he would never consider outsourcing chocolate production because he would lose his core differentiation advantage. Yet, in their enthusiasm for cost savings, several US technology companies have done precisely that – outsourcing their core technology and key strategic differentiator.

Design and Assembly are Different

This isn’t the first time companies have tried to commoditize software development. In the eighties, Japanese companies unsuccessfully attempted to set up software factories to manufacture programs. They discovered that just throwing a lot of programmers together doesn’t create innovative software.

Unlike software, it makes sense to outsource the manufacture of clothing and toys. Most of the cost of clothing and toy manufacturing is in the assembly, not the design. Those products can still be designed close to corporate headquarters but assembled elsewhere to keep costs low.

Programming is like design and nearly all of the costs of creating software come from writing the program, not the assembly. The assembly stage for software is really just copying the final program onto a disk and enclosing it with a manual in a box.

“If all you’re trying to do is essentially the same thing as your rivals, then it’s unlikely that you’ll be very successful. It’s incredibly arrogant for a company to believe that it can deliver the same sort of product that its rivals do and actually do better for very long. That’s especially true today, when the flow of information and capital is incredibly fast. It’s extremely dangerous to bet on the incompetence of your competitors — and that’s what you’re doing when you’re competing on operational effectiveness.”

Ultimately, the offshoring fad is bad for companies not because of the short-term programmer layoffs but because technology companies will lose their capacity to innovate. Tech companies that outsource their programming talent will ultimately be replaced by competition, and then everyone will be losing their jobs.