What makes for a successful simulation? Turns out, the key ingredients are the same as they were ten years ago. Simulations work when they are:

From one of the earliest posts on Forio’s (now retired) Forum, read more about The Four Key Attributes of Successful Simulations.

A few years ago I worked with the CEO of a large capital equipment manufacturing company. The company was losing market share, mostly to new international competitors. The CEO saw new opportunities emerging in foreign markets, but customers in these markets needed simpler and less expensive products than the company made. He realized the company needed to change the way it had done business for decades. To overcome their challenges and build market share, senior management developed a new and radically different vision for the company.

To communicate this new vision, the CEO organized a three-day offsite meeting for his top 100 managers. In addition to the usual presentations and seminars, managers ran a competitive strategy simulation during the three days. It was called a “corporate wargame” because teams of managers would be simulating their real company and competing against each other. From the CEO’s perspective, the objective was to build an intuition and deep understanding among his management team of how the new vision and strategy could be implemented.

The 100 managers were divided into 10 competitors, 10 people per competitor. All teams competed in one simulated market. That meant that if one team gained market share, it would be at the expense of the other teams. The simulation matched the company’s actual market size and demand for different products and prices in regions around the world.

This CEO had a lot of material that he wanted to cover in three days. He also wanted this retreat to be upbeat and fun. Some of the participants hadn’t seen each other in years, so the group needed time for socializing and group outings.

In order to meet other scheduling constraints, the CEO decided that the simulation would be run before breakfast, at lunch, and then after dinner for each of the three days. The problem with this schedule was that people typically used this time to relax. We were worried that the managers would rebel or disengage from realistic play.

Fortunately, the teams became competitive very quickly. Usually these managers would meet for a beer at the hotel bar after dinner. At this retreat, they took their drinks into the conference rooms we had set up for each team and strategized how to beat their competitors. Because we had intentionally made the teams as diverse as possible, the players spent more time interacting with their colleagues from other countries.

The teams got so engaged that the CEO had to personally go from room to room around midnight on the second day to get them to stop playing. He was worried that they would stay up all night and wouldn’t be alert for the next day’s presentations.

As the simulation progressed, the teams got creative. Even though it wasn’t initially included in the simulation, two teams merged to make a larger and stronger competitor. Other teams discussed alliances and tried to gather competitive information. At lunch each day, we announced performance and distributed a newspaper with stories featuring interviews with team members along with performance statistics and stock prices.

The simulation produced a vivid experience that managers remembered and discussed years later. Gold, Silver, and Bronze medals were awarded to the top three teams. As an indication of the level of player engagement, one of the members of the winning team was seen wearing his gold medal at breakfast the next morning as the buses prepared to drive everyone to the airport.

Because the simulation was competitive, participants were highly engaged and the managers learned the rationales and thinking behind the new company vision and strategy. Importantly, they built their intuition on how to best implement these new strategies. The simulation turned out to be a cost-effective way to communicate a lot of information in a short period of time. After the event was over, the managers were able take copies of the simulation with them use at their home offices to educate their own teams.

A few years ago, a crisis was developing for US farmers. A federal farm subsidy called the Conservation Reserve Program (CRP) was ending. Farmers, conservationists, and local citizens had different reasons to be concerned. In the short-run, the termination of the CRP would have a direct financial effect on farmers and, in the long-run, the economic vitality of the local communities, soil erosion, and water quality would all be affected.

Don Seville and I worked with Steven Taff from the University of Minnesota and Peter Buessler from the Minnesota Department of Natural Resources to create AgLand, a simulation that lets users test policies and see the impact on farms and the local environment.

The simulation lets farmers and policy makers change roles and experience differing incentives and pressures. Because it takes many years to see the effect of environmental changes, the simulation runs through twenty years in an afternoon. This way, players can see the short- and long-term impacts of their decisions.

AgLand is played in community centers and classrooms, and due to technical resource constraints, we focused the play of the simulation around a game board.

The game board is a map. On the map are four farms, a small town, a river with surrounding wetlands, and wildlife. An elected governing body known as the Policy Council is responsible for keeping citizens satisfied by influencing the management decisions of the farmers through policies. 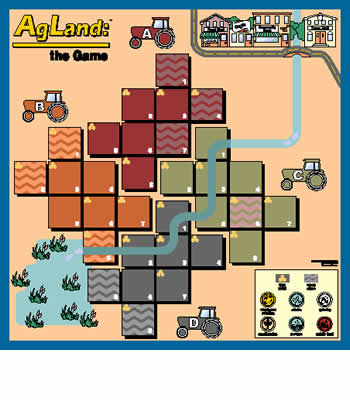 For each round of the simulation, players make decisions on the board by moving game pieces. Then, the information from the game board is fed into the computer. The computer simulates one year forward, and the results are put back on the game board.

What Happened in the Simulation

For the game, people who are farmers in real-life became policy makers. Before running the simulation, they would likely have espoused that they were free market advocates. Yet, in the debriefing, most participants came to realize how much their decisions had been driven by a goal of equalizing income. Most players ended up creating more government programs and attempted lots of quick fixes. They discovered that the policy tools they had available to them were blunt instruments.

People who played the role of farmers discovered that a system of government incentive programs could actually create a disincentive to adopting conservation practices. To quote one player, “We found ourselves farming the government or markets instead of the land.” In the debriefing, farmers complained they couldn’t achieve their goals because the government or market prices wouldn’t support them.

Typically the room became noisy as players moved about airing their opinions and making decisions. Facilitators encouraged conversation after each round of play, and periodically stopped the game to discuss what was going on.

Although AgLand is a simulation, it is not a human-versus-machine game. Nor is it solvable. AgLand mimics the ever-changing dynamics of the real world. Its main objective is to help participants develop strategies for dealing with complex and ambiguous issues and then think about the consequences of their choices. They might then reconsider assumptions they may have about the driving forces behind their local economy and environment.

While AgLand and the competitive strategy “wargame” are very different simulations, they share some similar attributes. These attributes are similar to other successful simulations. First, let’s review the main differences between these two examples.

So what do these two cases have in common? It turns out that these two examples share four attributes that are part of all successful training simulations.

It’s useful to consider attributes that aren’t included on this list. One attribute that comes up frequently that isn’t on the list is realism. This doesn’t mean that realism, especially for some audiences, isn’t important. It just means that realism is only useful in how it affects these four attributes.

But realism isn’t always beneficial. Realism can also be boring. It’s sometimes useful to tune-up the drama in a simulation in order to engage the player. Drama makes simulations more interesting in the same way novels involving extreme characters or plots can be more interesting.

You have to rank each attribute from the perspective of your audience. What is fun for Midwestern policy makers may not be fun for managers at a capital equipment manufacturer.

You can calculate a F.A.C.E. score by ranking each attribute on a scale of 0 to 10 and using the following formula:

For example, a training simulation you are evaluating might get a score of:

So what can you do to make your simulation more successful? I’ll discuss each of these four attributes in detail in future articles, but for now, here’s a short list of features that can make simulations fun, accessible, clear, and educational.

Calculating a score based on four attributes is a useful check, but it’s a bottom-up approach. Ultimately, simulation success is determined by your users; so there’s also a simple top-down approach to measuring success.

The simplest measure of success for a simulation is: people enthusiastically use the simulation without being required to. They tell their friends about it because they think their friends will also enjoy it and benefit from it.

Successful simulations don’t require a lot of advocacy and persuasion to motivate potential users because people are internally motivated to play them. The use of the simulation spreads via word-of-mouth throughout your organization. Colleagues compete with each other and proudly discuss their successes with others. Eventually, a successful simulation can become ingrained as part of a shared corporate culture and history. If the simulation is designed from the beginning with success in mind, then the terminology, lessons, and experiences it provides become deeply ingrained in the corporate culture. The simulation will have had a deep impact on affecting the future success of the organization.

Why Prototyping is a Good Idea

Avoiding risk when making decisions that are difficult to retract is why business prototyping is so important. The realism of the prototype you create should vary according to the complexity and consequences of the decision you’re making.